In May 2010 Diana received a commission to create a large stained glass entry way for a home here on the coast.  She had been thinking about a Neptune piece for some time and this opportunity seemed exactly right to bring Neptune to life.  As the piece started coming together and Neptune’s sea friends came into view a story began to emerge.  The first piece to be completed was Nautilus and it seemed he had a story to tell so here is the story of Neptune coming to town.  The entire project has taken a year and should be completed and installed by the end of May 2011 so come visit us again and see the final photos of Neptune as he takes up residence in his new home on the Sonoma Coast. 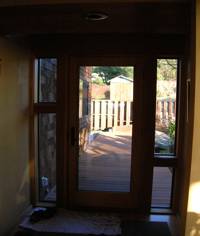 Entry way where Neptune will reside. 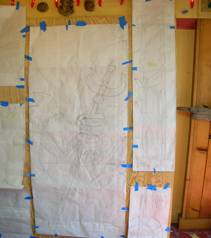 It was around May 2010 when we who live here at the beach in Bodega Bay heard Neptune would be coming our way. Oh, how excited we became because if you have ever had a king of the sea visit you know how much falderal goes on both before and after the visit.

As we watched and waited news began arriving from far, far away that things under the sea were changing which could only mean Neptune was on the move. The high tides became a bit higher sending more shells up on the beach. Of course when one notices how the seas are roiling and the shells seem to be all quivery with anticipation it would be prudent for one to hold a shell up to their ear to hear what the shells have to say. They all seemed to whisper, “he’s coming...! Neptune is coming…!”

Later we noticed the low tides were a little lower exposing more of the sea life on the rocks in the tide pools. As we bent down to both observe and listen at the tide pools it seemed the starfish and anemones were excitedly chatting with one another about how they had even seen Neptune but he was still far away at sea. As I said, the whole coast is quite abuzz that Neptune is coming to visit…it’s been years and years since he’s been seen in our neck of the beach.

Michael and I frequently go to one of the local hangouts, which just happens to be on the water, and I began noticing how many mermaids and other lady sea creatures had begun to hang out there too. We don’t usually see too many mermaids out and about here in Bodega Bay so it was somewhat of a surprise that so many of these ladies began being seen around town. 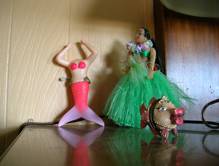 Here are a couple of Neptune’s friends.
Pinky Girl, on the left, has her head thrown
waaaay back howling a mermaid chant.
They have lovely voices you know.

We got to know some of them and asked if they were here for a bit. They said, yes, they were here for an extended period of time as Neptune was coming to town and they were going to stay for the festivities. In the meantime, while they wait we get to see them at the bonfires around the beach and occasionally you’ll see one out in the waves with the surfers. Turns out mermaids aren’t too good at standing and hanging ten on a surfboard but, whoa Nellie, can they ever body surf!!

Well, I’ll have to keep you posted on Neptune’s visit. Did I mention that the other day as Nautilus came slowly creeping by (as snails are wont to do) he said Neptune had been headed directly here but at the last minute something came up in Hawaii and he needed to head over there? Nautilus says Neptune probably won’t stay too long in Hawaii but after he tends to the business stuff he has a few dear friends he wants to visit with so he may stay there for a bit. 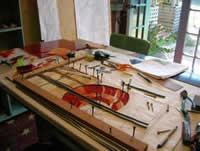 Nautilus slowly making his way to town to update us on Neptune’s arrival.

Neptune’s trident is starting to appear. 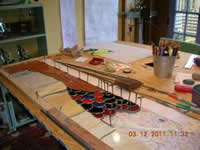 He's just coming over the horizon. We start to see his scales. He’s a colorful guy!

Did you hear all the hoopla in town last weekend when Neptune arrived? We thought that he might be here that weekend but were still surprised when he came up from the sea and into town. It was a wild and crazy afternoon with all the local folks getting together with Neptune after so long. He visited with us for awhile then gathered his mermaid friends and the seahorses and took off up the coast to see his new digs. When we got there the party was going strong with mermaids, sea creatures and local folks dancing and laughing around the fire pit, a little samba music in the air and more stars above then you’ve ever seen! It’s going to be a lot of fun having Neptune around. 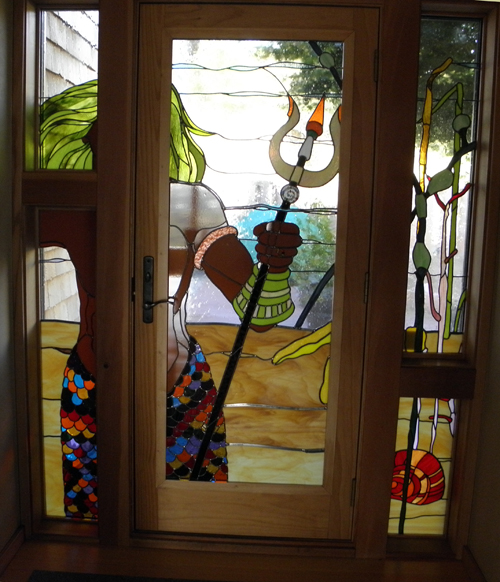